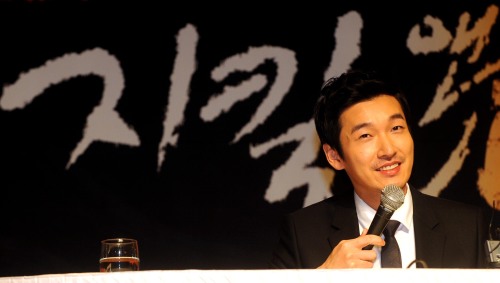 At the press conference for the soon-to-be released movie “The Peach Tree,” in CGV Wangsimni, Seoul,the leading actor Jo Seung Woo endlessly praised the film’s director, Goo Hye Sun, as “the most vigorous and driven director.”

In the movie, Jo Seung Woo stars as Sang Hyun, one of the siamese twins who falls for the same woman as his brother. This is Jo’s first collaboration with Goo Hye Sun.

“Goo Hye Sun is competent as an actress but I first worked with her as my director. Of all the directors I worked with until now, she is the most vigorous and driven director. She made sure that we were on schedule and didn’t bother any actors. She is also the prettiest of them all She really is the best,” expressed Jo.

Fellow actor Ryu Duk Hwan said, “Contrary to her baby face image, she has a knack to direct and as she is an actress herself, she empathizes well with the actors. It was really comfortable to work with her. Also, I feel energized just by looking at her face.”

“Peach Tree” is to be released on the 31st of this month.