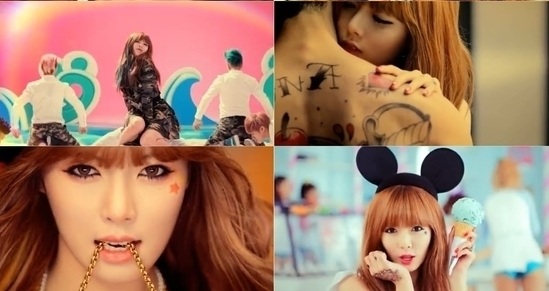 On October 26, HyunA’s “Ice Cream” music video reached the 10 million view point in just four days since its release, becoming the fastest MV to reach the milestone in K-Pop history. The record is in tie with Girls’ Generation’s 2011 single, “The Boys.”

HyunA released her new music video on October 22. On the first day of its release, “Ice Cream” brought in over 2 million hits, and in just four days, it amassed over 10 million clicks. Just for comparison’s sake, Psy’s “Gangnam Style” took nearly 15 days to get to 10 million views on YouTube. Psy, in fact, makes a cameo appearance in the “Ice Cream” music video.

Meanwhile, HyunA is scheduled to have her comeback stage on October 26 through KBS “Music Bank.” In case you missed it, make sure you check out our list of “HyunA’s 5 Sexiest Music Videos of All Time” here!

Girls' Generation
HyunA
Ice Cream
The Boys
KPLG
How does this article make you feel?