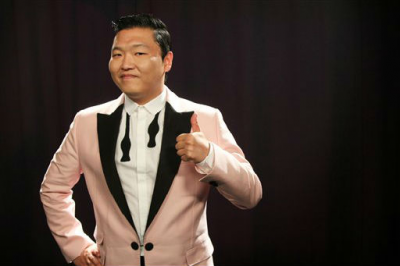 Singer PSY released pictures of himself taken with the famous celebrities of America.

On his Twitter on October 27, PSY uploaded two photos under the title, “Ehhh Sexy ladies.”

In one of the pictures is PSY dancing with Barbara Walters and the rest of the casts of ABC’s “The View.” This picture was taken after taping his appearance in this show. In this episode, which was aired on October 25, 80-something year old Barbara Walters learned how to dance PSY’s “horse dance.” This attracted a lot of attention internationally.

Barbara Walters is a famous anchor woman who won the award for Best Talk Show Host at the 2009 Daytime Emmy. “The View” is her renowned talk show where the current president of USA, Obama, has appeared as a guest last month.

The second picture shows PSY with the casts of MTV’s popular reality program “Jersey Shore.” This show had the highest viewing record in US, and therefore is considered the most successful program in MTV history.

Netizens who saw these pictures praised, “It shouldn’t surprise anyone anymore when PSY meets up with famous people,” “It looks like a photoshopped picture, but it really is Barbara Walters,” “PSY seems poised, even when he is standing beside a famous star like Barbara Walters.”

Meanwhile, PSY recently made the cover of Billboard magazine. He is also ranked number two on Billboard chart five weeks in a row.

PSY
U.S. Billboard
The View
Barbara Walters
Jersey Shore
How does this article make you feel?