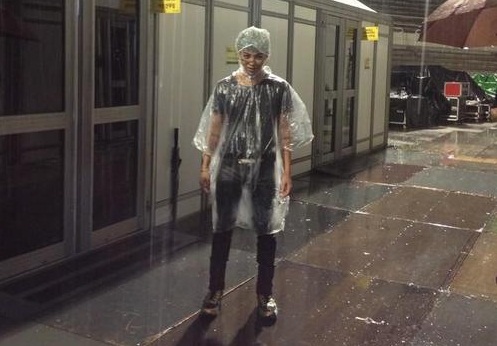 G-Dragon Shares A Creepy Picture in the Rain

An interesting picture of Big Bang’s leader G-Dragon has gathered attention from netizens.

On October 27 G-Dragon uploaded a picture on his official Twitter with the caption: “Singing in the rain~~~let’s go Malaysia!” In the picture he is standing in the rain wearing a transparent raincoat over a black outfit.

Facing the camera with that peculiar look on his face, his pose is reminiscent of the ’90s action movie “Nowhere to Hide.”

Meanwhile G-Dragon is busy promoting his super catchy hit, “Crayon.” He was in Malaysia for Big Bang’s “Alive Galaxy Tour 2012.” The group’s next concert will be in Los Angeles on November 2 and 3. For other concert locations and dates, check out this article (plus a picture of the Big Bang members in a pool).