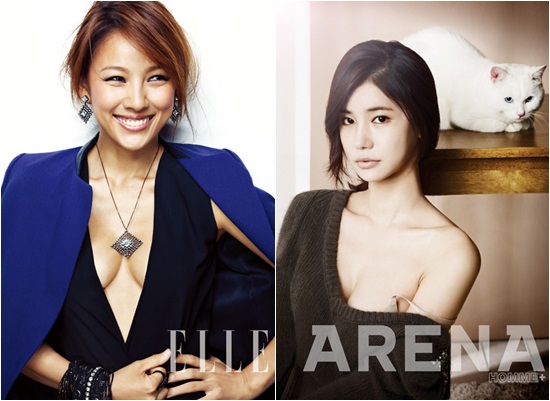 It’s getting cold here in Korea and the drop in temperature is most apparent in fashion magazine photos! We’re in full autumn-mode now and to get a better idea of how to style ourselves in the coming months, we took a look at all the November’s magazine photo shoots!

In this article, we’ve narrowed it down to 15 of the hottest magazine pictorials from the upcoming November issues. We hope we didn’t miss any of your favorite ones! And don’t forget to let us know which one’s your favorite in the comments section below!

(Click the numbers at the bottom of this article to see the rest of the photos!)

JYJ’s Jaejoong takes his gentleman’s look to India for the November issue of Elle Magazine!

miss A’s Suzy goes with the good ol’ pigtails for the next month’s Vogue Girl!

DBSK’s Yunho and Changmin partner up with Girls’ Generation’s Seohyun to grace the cover Ceci Magazine! They took the cover of Ceci’s Korean, Chinese, and Thai editions, and was featured in a special 26-page pictorial as well!

f(x)’s Victoria brings retro back with this fancy/colorful photo spread for Singles Magazine!

Big Bang’s G-Dragon says he wants to launch his own fashion accessory brand in the future during an interview with GQ Korea!

CNBlue’s Lee Jung Shin gets rid of his trademark long hair and goes for a softer dandy look in Elle Girl!

f(x)’s Sulli returns to her feminine roots in this pictorial for NYLON Magazine!

BoA gives a classy and elegant look in November’s InStyle magazine. During the interview, she said, “I always tell people I want to be remembered as a musician who’s worth the name.”

Lee Hyori shows she’s still got it in a special accessory photo spread for the upcoming Elle magazine!

Oh In Hye proves why she’s called the next “most glamorous” actress in the movie industry in these photo for Arena Magazine!

Seo In Guk says, “I would never be able to forgive my girlfriend if she cheated on me,” during an interview with @star1 Magazine.

Kim Hee Sun may be 35 years old and have a 4-year old daughter, but she looks as hot as ever! This photo spread was taken for the November issue of Marie Claire magazine, and all proceeds of the pictorial will be donated to the International Vaccine Institute!