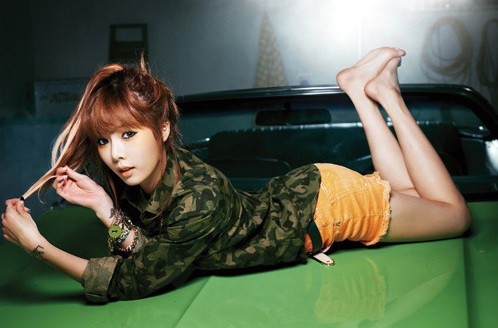 HyunA revealed additional album jacket photos for her latest single, “Ice Cream.” The five new photos follow a constant theme with HyunA showcasing her “girl-next-door” image alongside an old school car parked in the garage. In one of the photos, HyunA tries to shove in a giant scoop of “Ice Cream” into her mouth, giving a good laugh to her fans.

Netizens that saw the photos commented, “Whatever HyunA does, it has sexy all over it,” “I would like to give her something to eat instead,” and “Why is she not getting in the car instead?”

Meanwhile, HyunA’s “Ice Cream” music video has been an instant hit, generating over 10 million views in just a week, and it now has over 16 million clicks on YouTube so far. Enjoy the photos below!

HyunA
Ice Cream
KPLG
melting
How does this article make you feel?