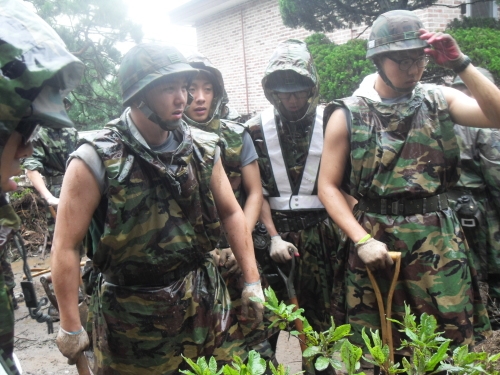 Super Junior’s Leeteuk has joined the Korean army today to fulfill his 21-month mandatory military duty. We feel for all you Super Junior fans and we understand how tough it’s going to be to wait for Leeteuk’s comeback.

One way to help time go by faster is to check out Soompi’s own collection of “Leeteuk’s 10 Cutest & Sexiest Moments” here, but if that’s not enough, we recommend that you go through this list to see which idols are currently enlisted, or even finished their military service. There’s no doubt 21 months are a long time to wait, but sometimes it’s best to just patiently wait, and the 21 months will be gone before you know!

Flip through the list and don’t forget to let us know if we missed anyone! We miss you Leeteuk!

Kang In used to be one of the busiest and most popular Super Junior members prior to joining the Korean army in 2010. Although his image was slightly hurt following a slew of controversies that year, he successfully completed his two year service and is now fully back as a proud SuJu member.

2AM’s Changmin finished his military duty before making his debut. Born in 1986, Changmin was 20 years old at the time of enlistment and completed his service in 2008. It’s very uncommon for idol stars to finish military service that early since most of them are busy with their training in their late teens to early 20s, but Changmin was able to make his debut in the same year that he finished his military service.

One of the many Korean celebrities that have enlisted this year, Kim Kyu Jong started his service on July 23, 2012. In fact, Kyu Jong is the first SS501 member to have joined the Korean army. At the press conference prior to entering the boot camp facility, Kyu Jong gave an emotional speech, saying, “Time really does fly. It’s already been 7 years since I first met our fans – and the 2 years will also go by fast just like that.”

Can you believe it’s already been over a year since Heechul enlisted? Heechul bid farewell to his fans in September 2011 and is currently serving as public service personnel in Seoul. Public service personnel have more freedom than regular soldiers, and that’s why you frequently see Heechul’s photos on other celebrities’ personal Twitter and me2day accounts. In less than a year, Heechul will be done with his military service!

Perhaps better known for his role on KBS drama “Boys over Flowers,” Kim Joon joined the ranks of other celebrity soldiers in September 2011. After the 5 week boot camp training session, Kim Joon is now serving as a PR ambassador for the Korean police. Not a lot of people are aware of his band, T-Max, but they haven’t disbanded following Kim Joon’s enlistment.

We weren’t sure if Shinhwa should be part of this list, since other 1st and 2nd generation idol groups were omitted. But Shinhwa, after all, goes by the nickname, “Longest-running Idol Group,” so we had to put them in here! Lee Min Woo completed his service in February 2012, becoming the last Shinhwa member to finish military duty.

Does Rain belong here? Tough question, but he was enjoying idol-like fame at the time of his enlistment last October, so we decided to include him. His outstanding shooting and training results have been well-publicized and he’s being reported as one of the best-trained soldiers. It’s already been a year since his enlistment so just wait a little over 10 months, all you Rain fans!