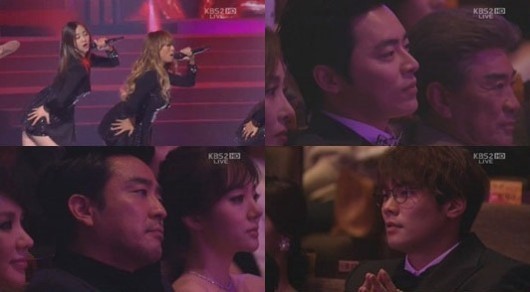 Pictures of the reactions of male actors to SISTAR’s performance have been making its rounds around the web.

On October 30, the 49th Grand Bell Awards, hosted by actors Shin Hyun Joon and Kim Jung Eun, aired live on KBS. On this night, the sexy group SISTAR gave a special performance of their hit song “I’m Alone.” Their sexy and magnetic charms captivated the audience.

During the performance shots of actors Daniel Choi, Jo Jung Suk, and Ryu Seung Ryong looking rather serious were captured. Um Jung Hwa on the other hand had a bright expression as she watched her industry juniors perform.

After their performance the host Shin Hyun Joon joked, “It’s alright to look a little happier. This is a celebration isn’t it?” and loosened up the atmosphere.

The Grand Bell Awards has been a tradition of recognizing and celebrating film achievements for fifty years. It is the largest film award ceremony in Korea and gives out awards for Best Film, Best Director, Best Male Lead, Best Female Lead, Best Rookie Actor, and others.

Check out the red carpet arrivals and the other nominees here.