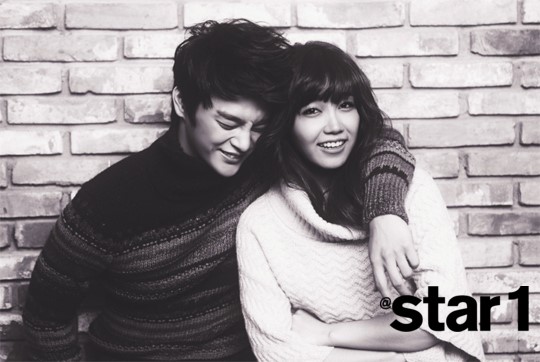 Earlier, we reported on a sneak preview of A Pink’s Jung Eun Ji and Seo In Gook‘s couple photo shoot for fashion magazine @star1. Recently, more photos from the pictorial have been released online!

The two singers/actors have skyrocketed into fame after playing the roles of Sung Shi Won and Yoon Yoon Jae on the hit cable drama, “Answer Me 1997.”

“Answer Me 1997” received wide popularity from viewers for it’s detailed portrayals of the 90s, which brought about a longing sense of nostalgia for many of the fans in their twenties and thirties.

Many fans have been curious about the real-life relationship between Jung Eun Ji and Seo In Gook because their on-set chemistry was just so natural and good. @star1 reports that both stars were equally as natural and close to each other as they were in the drama.

Both stars show off their couple-y charms as well as model some of the trendiest outfits for this fall season.

Click on the arrows to view the photos and get ready to fawn over the cuteness!

Apink
Jung Eun Ji
KPLG
@star1
Seo In Gook
Answer Me 1997
How does this article make you feel?