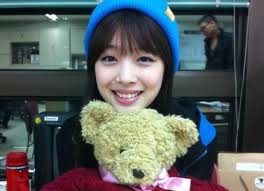 f(x)’s Sulli Looks Like a Doll in “High Cut”

Singer Sulli from girl idol group f(x) has taken a few pictures for the November issue of the magazine “High Cut.” Sulli took off the boyish look from her character in the drama “To The Beautiful You” that ended last month, and instead opted for a more feminine and sweet look.

In one picture, Sulli is sitting on a black couch wearing nothing but a simple floral dress and clutch, yet the aura she gave off was different and more mature than the ones from other female idols.

In “To The Beautiful You,” Sulli played Goo Jae Hee, a girl living in the US who comes to Korea to attend the same school as her idol Kang Tae Joon, played by SHINee’s Minho, a track and field athlete. However there is one problem, Kang Tae Joon attends an all-boys high school, and so Goo Jae Hee must disguise herself as a boy to enter. The drama is the Korean version of the popular Japanese drama, “Hana Kimi.”

SHINee
f(x)
High Cut
Minho
Sulli
KPLG
To the Beautiful You
How does this article make you feel?