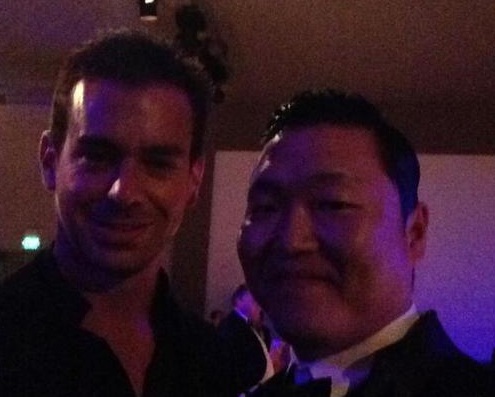 Psy’s global network of friends keep on growing! On November 1, Psy tweeted a surprise shot with Jack Dorsey, the founder of the social network service, Twitter.

Alongside the photo, Psy wrote in English, “Isn’t this funny to tweet pic with Jack Dorsey, founder of twitter. It was pleasure man.” It’s unclear where or how the two became friends, but from the looks of the background lights, it seems the two met at a social event.

In response to Psy’s tweet, Dorsey responded, “Great meeting you.”

Netizens commented, “Psy has the most high-profile friends in Korea,” “He shared a photo with Twitter’s founder on Twitter,” and “Where does he meet all these people?”

Meanwhile, Psy’s “Gangnam Style” has been ranked #2 on Billboard’s Hot 100 Singles Chart for the sixth consecutive week. He’s currently in the U.S. gearing up for his U.S. debut album as well as his first U.S. concert tour.