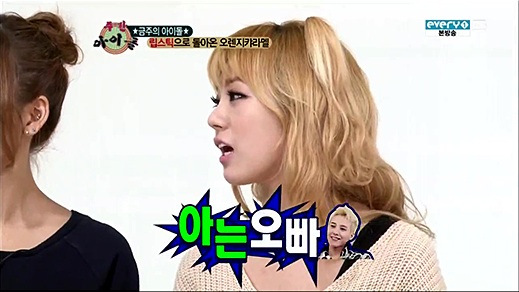 After School’s Lizzy explained the recent dating rumors between her and Big Bang’s G-Dragon. During the October 31 episode of MBC Every1’s “Weekly Idol,” the show’s hosts Jung Hyung Don and Defconn asked, “The Internet has been heating up recently with your scandal. And your partner is G-Dragon!”

Lizzy, in response, said, “First of all, it’s my honor,” to which the MCs said, “Where there’s smoke, there’s fire!” However, Lizzy denied the rumors, saying, “I honestly think there could be smoke when there’s no fire.”

When asked if she knew G-Dragon’s phone number of KakaoTalk ID, Lizzy answered, “I don’t know his number but I do know oppa personally.” Her response, however, prompted further speculation as the MCs questioned the use of the term “oppa,” which is reserved for people you know at a more personal level.

Lizzy again denied her relationship with G-Dragon and disputed, “Then what do you want me to call him? Unni?…I don’t have G-Dragon’s number nor his KakaoTalk ID.”