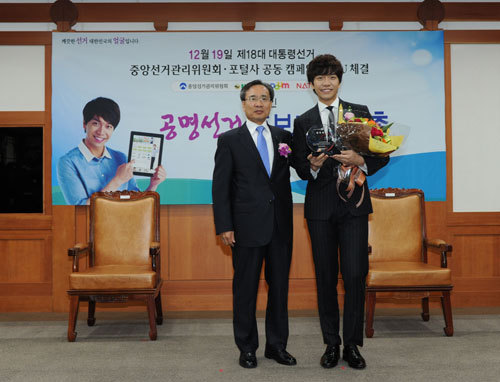 On October 31, Lee Seung Gi was appointed to be the ambassador for fair online election by the National Election Commission. He will be supporting clean online election campaign and encourage voters’ participations by becoming the model for various campaign websites.

The director of the National Election Commission, Moon Sang Boo, stated, “For the 18th presidential election, we believe that internet will be a big information source for the voters on campaigns and the election. We hope that the portal websites (Naver, Daum, and Nate), which have signed the MOU, will be able to promote fair online election.

Hosted by TBS’s anchor Jung Eun Gil, this event included the introduction of the new honorary ambassador, presentation of the letter of appointment, speeches by Moon Sang Boo and the ambassador, and the signing of MOU by the portal websites. A show under the theme of “Fair election is what Korea is about,” was also performed.