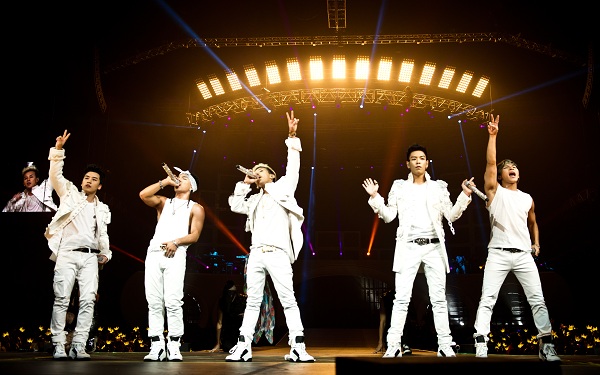 Big Bang kicked off the U.S. leg of their “Alive Galaxy Tour 2012” world tour concert in Los Angeles, in front of a sellout crowd of 24,000 fans.

The concerts were held on November 2 and 3 at the Honda Center in Anaheim. Both shows sold out all tickets, extending a streak that started from their Japan concert in May. Their previous concerts in China, Thailand, Taiwan, Malaysia, Singapore, and Indonesia have all sold out as well.

In fact, both the L.A. and New Jersey concerts were sold out even after adding another show, proving the group’s global popularity. Also, it’s particularly impressive considering its Big Bang’s first concert in the U.S., and they’ve never officially promoted in the country.

For the L.A concert, Big Bang performed 23 of their hit songs, including “Still Alive,” “Lie,” Haru Haru,” “Heaven,” and “Fantastic Baby.” G-Dragon, in particular, gave a live performance of his latest single, “Crayon,” with English rap mixed into it.