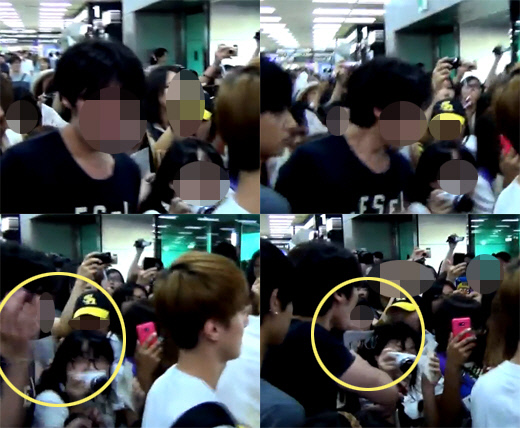 SM Manager Criticized for Hitting EXO Fan at the Airport

An old video of EXO’s manager hitting a fan at the airport has recently resurfaced online under the title, “EXO’s Manager That Hits Fans.” The video was filmed in August when SM artists, including Super Junior, EXO, and f(x), were arriving through Gimpo Airport.

In the video, a huge crowd is waiting in front of the gate for EXO to show up. When EXO passes through the gate, one of the fans wearing a school uniform and glasses, with a camera in hand walks towards the EXO members. Just when the fan is about to snap a shot of them, the SM manager appears from the side and slaps her forehead to go away. The fan girl loses her glasses and walks away covering her face in apparent pain.

Netizens who saw the video expressed their rage against the manager, who ironically, seems to be the same manager that made headlines last year for hitting one of the SHINee fans at the airport. The same fan-hitting incident happened in 2010 when SHINee was approached by one of their female fans. When the fan appeared to say something to Jong Hyun, the manager ran and pushed her head in the back to move away.

Back then, as the issue became bigger, SM Entertainment had to release a statement to address the issue. They said, “It was an accident that happened last August while moving to our next schedule. We are deeply sorry for causing this to happen and we’ll make sure prevent this from happening again.”

Netizens commented, “Sasaeng fans are wrong, but they should never hit their fans,” “Why does this keep coming up on the press?” and “They need better managers.”

You can see the EXO fan incident in the video below. Does the manager have the right to hit fans in certain situations?

And this is the image of SHINee’s fan get hit by the same (?) manager: