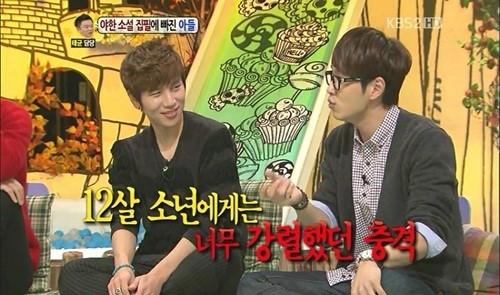 K. Will and Lee Seok Hoon Share Their First Experiences with Adult Material

After introducing the story, the MCs asks the guests, “When did you first come across adult material?” Then K. Will honestly revealed, “It was when I was in middle school.”

When asked how he felt, K. Will answered, “My friends and I were really excited at first but as soon as it started, no one talked. Because we were so shocked, we were silent,” which caused the studio to laugh.

Then, the MCs turned their attention to Lee Seok Hoon by saying, “You have an image of being a nice guy so it doesn’t seem like you would even look at adult clips. Isn’t your nickname, ‘church oppa?'”

But Lee Seok Hoon quickly answered, “I started when I was in 5th grade of elementary school,” which caused every to laugh in shock.

He continued, “I was playing baseball with my friends when one of them said he had something good at home.” But it seemed like Lee Seok Hoon was a bit too young because he revealed that upon seeing it, he threw up because of the shock. He said, “After that, I forgot about it but I came across it again in my second year of middle school. By then, I knew what was going on.”

Meanwhile, K. Will and Lee Seok Hoon are actively promoting their new ballad singles, “Please Don’t” and “Because I Like You,” respectively.