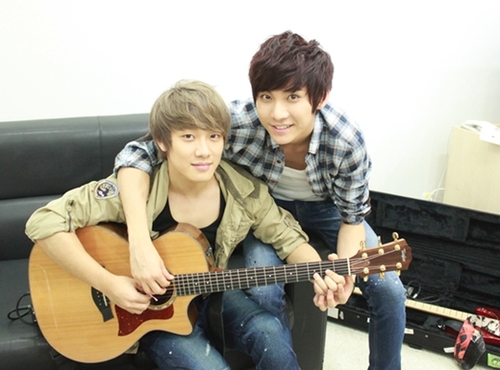 Recently, FT Island‘s two maknaes Choi Min Hwan and Song Seung Hyun updated fans with a selca on twitter. Fans welcomed such update with open arms since FT Island finished the promotion of their 4th album “Five Treasure Box” in Korea on October 21 and is no longer seen on TV.

Choi Min Hwan posted on his personal twitter account, “Writing a song together~ What kind of song will we end up with?” and added a picture of himself with Song Seung Hyun in front of a computer monitor to the post. Song Seung Hyun also updated his twitter with a picture and commented, “It’s time to go to sleep.”

Previously, Choi Min Hwan and Song Seung Hyun wrote a song together in their junior year of high school. As this song, “Compass,” was featured in FT Island’s 4th album and garnered much attention, many fans and listeners are anticipating to see what this songwriting duo have in stock.

Meanwhile, Choi Min Hwan and Song Seung Hyun does not only share amazing song-writing abilities, but also the title of the youngest musical theater performers to play the main character. Song Seung Hyun was first cast as Daniel, the main character of “Jack the Ripper,” and was highly praised for stable acting and vocals. Recently, Choi Min Hwan was also cast for a musical theater production. He will be playing the main character Ji Yong of “Gwanghwamun Sonata” in Japan. His first performance will be on November 23 in Osaka.