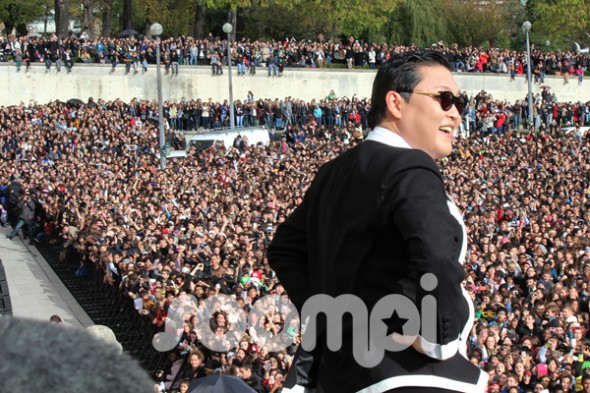 As reported yesterday, a very special event took place in Paris on November 5 near the Eiffel Tower. Nearly 20,000 people came to see PSY and dance to “Gangnam Style.” The flashmob of the now-global star was announced by several French media to encourage people to attend the event organized by Universal Music France and the popular French radio station NRJ.

At 1PM, when the flashmob was set to start, a huge crowd of K-Pop fans, “horse dance” addicts, and curious tourists was forming together. Even though people attending the event were from different ages and came from different backgrounds, the flashmob went off without a hitch. PSY performed “Gangnam Style” twice, once to test out the people’s energy, and a second time, coming closer so that people at the back could see him better.

PSY seemed glad to be in Paris and be able to meet the French audience for the first time. After this successful flashmob, PSY also appeared in a French program called “Le Grand Journal” on Canal Plus channel yesterday. It was the second time a K-Pop artist is featured in this program as Girls’ Generation appeared on the program last march after the “Music Bank” concert in Paris.

Now check out more of our exclusive pictures!