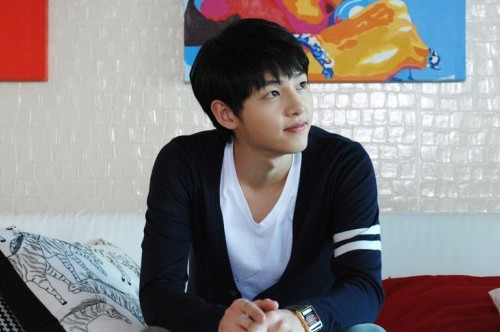 Song Joong Ki will be joining the free agent market at the end of the year. His exclusive contract with his current agency Sidus HQ is to expire in December. As he has gained much popularity and acknowledgement through his recent success in film “The Werewolf Boy” and KBS “Nice Guy,” all experts in the showbiz industry are paying close attention to his decision.

Especially since the current showbiz industry lacks talented male actors in their 20s compare to previous years, many agencies are competing against each other to recruit Song Joong Ki. An industry expert commented, “Several agencies are already contacting Song Joong Ki with sweet deals. However, since his current contract with Sidus HQ is not expired yet, Song Joong Ki is being really careful in making the decision.

Song Joong Ki first made his debut with film “A Frozen Flower” and starred in dramas such as “Triple,” “OBGYN,” “Sungkyungwan Scandal,” “Deep Rooted Tree,” and so on. Recently, the big success of both his drama “Nice Guy” and film “The Werewolf Boy” proved that Song Joong Ki has talent and commercial viability, attracting many excited agents and agencies attention.