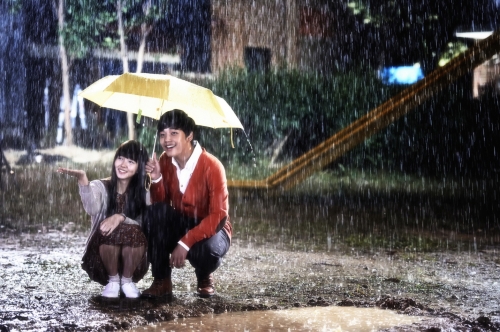 Child Actors Dazzle in Pilot Episode of MBC “I Miss You”

The very first episode of new MBC drama “I Miss You” portrayed the destined encounter of Yeo Jin Goo and Kim So Hyun. The two main characters Han Jung Woo (played by Yeo Jin Goo) and Lee Soo Yeon (played b Kim So Hyun) were drawn to each other by destiny and became close friends instantly.

However, “I Miss You” suggested the couple’s tragic love story from the very first episode. Lee Soo Yeon was a murderer’s daughter and this title followed her everywhere. As a result, she did not have a single friend around her. Her classmates distanced themselves from her as if Lee Soo Yeon had committed a murder. Her mother was incapable of protecting her daughter from others and their unfairly harsh criticisms.

Han Jung Woo was also caught in the middle of family tragedy. His father Han Tae Joon’s (played by Han Jin Hee) greed for money and power drove him to attempt to kill his half-brother (played by Yoo Seung Ho). When his stepmother Kang Hyun Joo (played by Cha Hwa Yeon) found out about this evil scheme, she made plans with people around her to abduct Han Jung Woo.

Also in this episode of “I Miss You” showed Lee Soo Yeon and Han Jung Woo’s delicate puppy love. In this episode, Yeo Jin Goo proved that his sensational popularity gained from “The Moon that Embraces the Sun” wasn’t simply an overhyped syndrome. His acting was stable and detailed with emotions. He portrayed Han Jung Woo’s puppy love through flustered and yet mature expression. When he found out that Lee Soo Hyun was in fact a murderer’s daughter, Yeo Jin Goo expressed changes in Han Jung Woo’s emotions with delicacy, expressing young Han Jung Woo’s confusion holistically.

The other child actor, Kim So Hyun, also impressed viewers with her acting. She successfully portrayed the loneliness of Lee Soo Yeon, who is going through serious family problems without a single friend to talk to. The emotions expressed by these child actors surpassed any viewer’s expectations. Yeo Jin Goo and Kim So Hyun will continue to appear in “I Miss You” until episode 4. From the fifth episode, Park Yoo Chun and Yoon Eun Hye will be playing adult Han Jung Woo and Lee Soo Yeon.

Yoon Eun Hye
Kim So Hyun
Park Yoo Chun
The Moon That Embraces the Sun
Yeo Jin Goo
KPLG
I Miss You
How does this article make you feel?