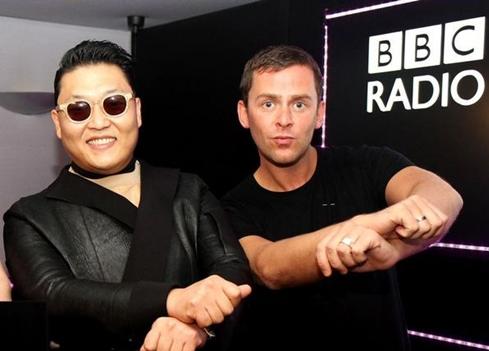 Congratulations to PSY for making it to #1 in the UK!

On November 9, he put a picture on his twitter along with, “No.1 trophy from the UK’s @officialcharts along with @scott_mills lol.”

In the picture PSY is standing with the UK’s famous radio personality Scott Mills and holding up the trophy. They both have excited expressions.

Scott Mills is the DJ of the popular BBC radio program “Scott Mills’ Radio.” On October 20, he translated PSY’s “Gangnam Style” into English on the air. Instead of using “Gangnam Style’s” upbeat music, he read the translated lyrics with classical music playing in the background to the amusement of his listeners.

On November 8, PSY made it to number seven on the Billboard Top 100 chart with his hit, “Gangnam Style.” He is currently ranked second place behind Maroon 5 for the number of broadcasts, but just made it to the top ten on the American Top 40 for the first week of November. This makes the possbility of reaching number one on American music charts very promising.

PSY
KPLG
scott mills
How does this article make you feel?