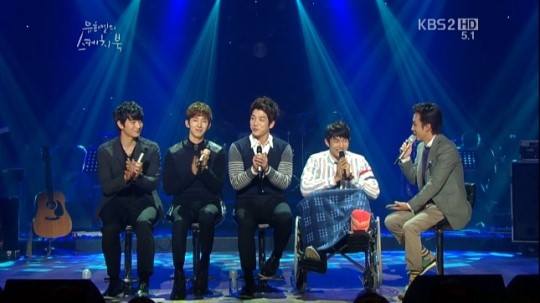 The 4-member ballad boy group 2AM from JYP Entertainment recently turned up on the KBS2 “”Yoo Hee Yul’s Sketchbook” on the 9th. It was especially surprising to see one of its members Seulong performing on a wheelchair, his first public appearance since his foot surgery.

The group started out by singing their song “I Wonder If You Hurt Like Me” that was released early this year.

Above all, the spectators of the show were moved by Seulong’s unexpected appearance and cheered even more as it showed that he really made the effort to do his best.

On the upcoming 24th and 25th of this month, 2AM will host “The Way of Love” concert in Olympic Hall located in Olympic Park.

2AM
Seulong
KPLG
Yoo Hee Yul's Sketchbook
How does this article make you feel?