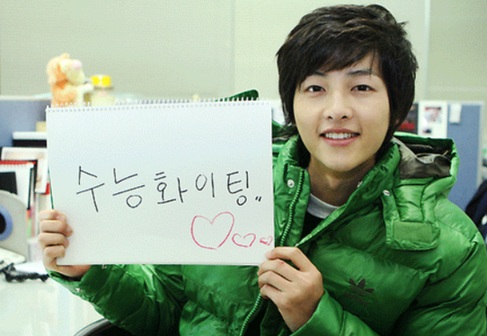 Celebrities Show Off Their CSAT Scores

On November 8 high school seniors all over Korea took the notoriously difficult CSAT test (equivalent to America’s SATs). Now that the test has passed several celebrities have revealed their own scores.

Ballad group Sweet Sorrow is famous for being a well-rounded group with members graduating from Yonsei University (one of Korea’s top ,universities). On MBC’s “Haha19TV”, members Sung Jin Hwan and In Ho Jin revealed their academic achievements. Sung Jin Hwan’s CSAT score was in the top 0.4% of the county and In Ho Jin’s received all As in middle school.

Comedian Park Ji Sun is famous among comedians for graduating from a top college with a degree in higher education. She came on SBS’ “Midnight TV Entertainment” and confessed, “I received a good score on CSAT. My score was in the top tier.” For an explanation of her top marks she explained, “When I was studying I never slept.”

Park Ji Sun has worked with another high scorer, Sungkyunkwang University student and popular actor Song Joong Ki. “My CSAT score was 380 (out of 400)” he announced, making him another smart celebrity. He added, “When I was in school I was very faithful to studying. Seeing my high scores was enjoyable and I competitively studied very hard.”

On the contrary, Haha confidently bragged about his low CSAT scores. On his “Haha19TV” show he said, “My high school scores were among the lowest. For my CSAT I received a score of 127.8 out of 400.”

On November 8 Haha put on his twitter to encourage similar students like him, “To all the mediocre and bottom students taking the CSAT: it’s fine to be good at only one thing. Fighting! You won’t die!”