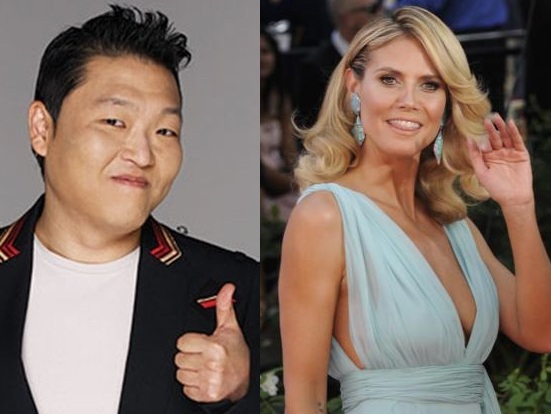 PSY and Heidi Klum Go On a “Gangnam Style” Date!

Let’s add on yet another famous celebrity to PSY’s growing network of friends! This time, it’s the worldwide model and TV personality, Heidi Klum.

PSY’s “Gangnam Style” has been nominated for the Best Video award at the 2012 MTV Europe Music Awards (EMA 2012). He will also be performing at this awards ceremony as well. If Psy were to win this award, he would be the first Korean to win the award and perform on the same night. Heidi Klum is the host for this award show.

According to SBS MTV, PSY and Heidi Klum are together, filming for a short clip that is to be revealed during the EMAs. In between filming, Psy and Heidi Klum can be seen being friendly and talkative to one another.

On November 10, Psy arrived in Frankfurt, Germany, where the EMAs will be held this year. Heidi Klum attended a press conference on November 10 for the EMAs and afterwards met up with Psy to record the program.

Heidi Klum sports the same sunglasses and the same blue suit outfit as Psy and had fun dancing the “horse dance” together with Psy.

Sources from SBS MTV said, “Psy and Heidi are having a lot much fun as they are working together right now.”

PSY
KPLG
Gangnam Style
Heidi Klum
How does this article make you feel?