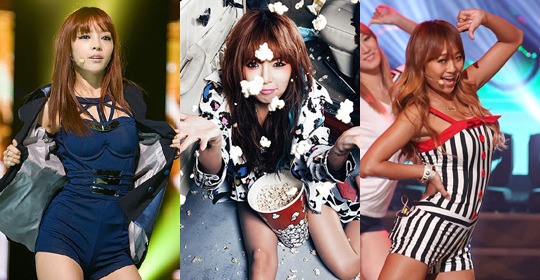 After the sad news that Lee Hyori will be stepping down as the face of soju brand “Chum-Churum,” three female idol top stars have been chosen as the new models: Kara‘s Goo Hara, 4minute‘s HyunA and SISTAR‘s Hyorin.

Lee Hyori has been the beloved model of “Chum-Churum” for five years. However, she decided not to renew her contract, which led the brand to pick three new faces. It is reported that Goo Hara, HyunA and Hyorin have finished filming for their first CF.

The three idol stars were picked as the “post-Lee Hyori’s” to represent the leading soju brand, which is becoming a hot topic already. Goo Hara is also Lee Hyori’s direct junior from DSP Media and the two already have a close senior/junior friendship. Many say that HyunA has received the baton from Lee Hyori as the hottest sex icon in the K-Pop industry. SISTAR’s Hyorin also emerged this year as one of the sexiest and talented singers.

Sources say, “Lee Hyori’s juniors have received the symbolic spot that Hyori has been protecting for so long. It feels like the transition between generations is very natural. Since the brand is so symbolic in the first place, when the new models finally show their faces, we think it will have an immense effect.”

On November 12, Hyori tweeted, “I had a beautiful farewell today. Since I experienced a farewell, I will comfort my heart with some soju. Which soju should I drink? Hmm,” which let everyone know that she did indeed end her contract. She continued, “For several years, there were times when I liked that my face was on a soju bottle and there were times when I didn’t. I hope my smiling face was comforting to all those who were having a hard time. Thank you so much.”