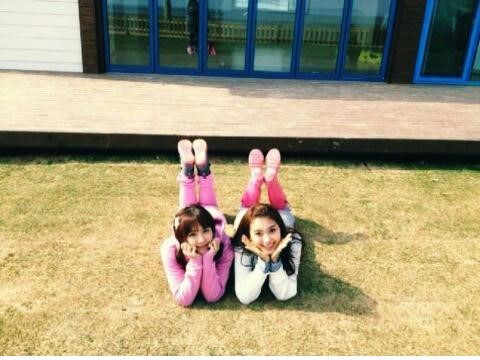 Sistar’s unni Bora had a chance to sit down with Star Column for an interview.

Click here to read Part 1 of Bora’s Interview: “My Childhood Dream Was to Become a Pianist”
–

After debuting as Sistar, I became close friends with a few celebrities. (My Sistar members don’t count because they’re like family ^^) The precious people I’ll introduce! Even though I’m a little shy and there are some things I haven’t shared with them, I’ll use this opportunity to share a little of my thoughts.

Yewon is a celebrity friend who’s from the same hometown. Our mothers’ hometown is Jindo. Our families are neighbors and it’s interesting that our families knew each other before we did.

This is such a special connection. (Am I the only one to think this? Haha) We became really close because of this and shared conversations. There are times when people will see us on “Invincible Youth” and ask “Are those two not close? Did they fight?” They misunderstand. It’s because we’re so close that we’re able to show such sides. Don’t worry! (Broadcast is just broadcast, please don’t misunderstand!)

Yewon and I are from the same hometown and both have darker skin. I even wondered “Are we sisters” Kim Yewon! (Including our last names is our little nickname ^^) I’m always thankful and I appreciate you. Let’s do our best. Always thankful!

My second friend is MBLAQ’s Mir! His nickname is “Chuh Ryong.” His real name is Bag Chul Young so we call his name cutely. ^^ He seems to be really playful on air, but in reality he’s very serious and has good manners. He’s young, but has helped me find my way back when I was rebelling so he’s a very good friend. (But, I’m the unnie ㅠ-ㅠ) And as a nuna and friend, I will be a strength to Mir.

Lastly, Girls’ Generation’s Sunny who I met during “Invincible Youth”!

It was really hard trying to approach her during the earlier part of the show. It’s because she’s from “Girls’ Generation” and she was at a much higher place than me and also a great senior in the industry. But her and my tomboyish ways taking care of small things and each other sped up our relationship and we got real close.

Sunny has such a coooool personality and is so full of aegyo. She tells me that she thinks of me when she sometimes watch a drama or movie at home. Sunny! Me too~~~ <3