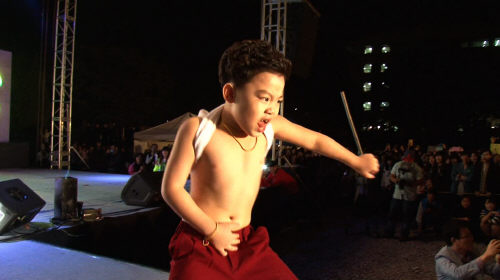 During an interview, when the anchors requested for a short piece of his dance routine, it was as if he was waiting for it all throughout the program and started to dance to PSY’s song. Even though the news program might have seem to be a bit too somber and serious for Baby PSY, he acted like he had been there innumerous times and started to take off his sunglasses and blue jacket and searched for the camera to focus on his dance.

When Hwang Min Woo began to rap for PSY’s “Right Now” song, he took off his sleeveless shirt and wrapped it around his neck to make it seem like a vest. The anchor commented, “Though there were indeed performances on the set, we have never seen such an extravagant and impressive one.”