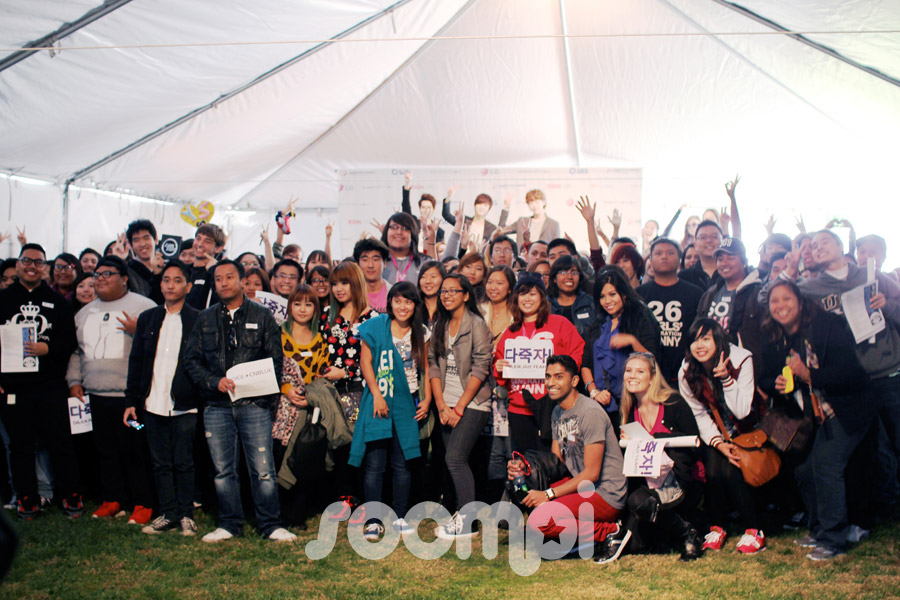 To be near your favorite artist, to see them offstage and close up – these are things most fans dream of. On November 10, 2012, I had that feeling of anticipation as I excitedly woke up knowing I would be a little closer to my boys of CNBlue. There were fans lined up for hours to be near their favorite K-Pop stars. They arrived at the venue before 8am and were not let inside until 11am, even though the first of the fan meets were not scheduled until 2pm.

Members of CNBLUE from left to right: Jonghyun, Minhyuk, Jungshin

The only way to be guaranteed a spot in a fan meet was to be a VIP ticket holder, which allowed you to choose a fan meet of your choice. The possible fan meets were: CNBlue, Karmin, Girls’ Generation, Kara, BEAST, 4minute and SISTAR. The fan meets were actually shorter than expected due to the schedules of the artists. During the CNBlue fan meet, the group minus Jung Yong Hwa entered, and fans were allotted one minute to take pictures. Lee Jung Shin greeted the fans in English, and then four fans were chosen to have a dance off. The guys chose a winner who was able to take a picture alone with them, while the runners up got CDs. Then everyone in the fan meet took a group picture with the band.

The winning fan of the dance off with CNBLUE

What stood out to me the most about the fan meets were the actual fans. Yes, it was amazing to be in the same tent with CNBlue, but that was over in a blink of an eye. During this time, I was able to meet some pretty cool people waiting in line to see their favorite stars. I loved seeing the diversity of the people that were in the lines – there were girls, guys, teenagers, young adults and older adults. Fans held signs and gifts as they waited along the barriers just to get a glimpse of their favorite artists. Some people who were waiting around to get a peek were lucky enough to get a sticker to go into the fan meet.

I asked some of these fans about how they got into K-Pop, why they came and how many times they had come to a K-Pop event. I began my quest to meet some fans with the first two people in line to meet Girls’ Generation. The first person in line was Francis, who had flown in from Massachusetts. He got into K-Pop through some friends at school and this was not his first time seeing Girls’ Generation in person. In fact, he has seen them in Paris, New York and Los Angeles! The next person in line was Eric, who is from LA and is not new to this whole K-Pop thing either. This dedicated fan has gone to see them at the SM Town concerts including the recent one in Anaheim, and then drove 400 miles for the concert at Google the following day.

I then moved to the other side of the barrier and talked to the person who I think traveled the furthest to see CNBlue. Her name is Eleynmar, and she flew all the way from Puerto Rico – yes, you read that right. I was blown away by not just the time sacrifice but the monetary sacrifice to see CNBlue for a few hours. Eleynmar, like myself, got into K-Pop through good ol’ K-Dramas. Those darn OST songs just hook you and suck you into this whole world, but I don’t regret it and she doesn’t either. She also mentioned that her whole family is into K-Pop – good job spreading the love, Eleynmar!

I also talked to some BEAST fans that were waiting on the other side of the lawn to meet their boys. As I was trying to find someone to talk to, a father volunteered his daughter Jamie to talk to me. As if fans flying from out of the country for this concert wasn’t impressive enough, Jamie learned Korean to enjoy her K-Pop! I must admit, this is something I have tried but have not been successful like Jamie because I still need to read subtitles when I watch dramas. Another cool BEAST fan I met was Zena from Sacramento who has been a fan for 3 years. This dedicated fan has driven many times down to Southern California to get her K-Pop fix.

American K-Pop fans truly amaze me because of their dedication, diversity and loyalty. I hope the artists feel supported and loved when they see all of the great fans that come to their concerts.

Stay tuned for our recap and exclusive photos from the concert!