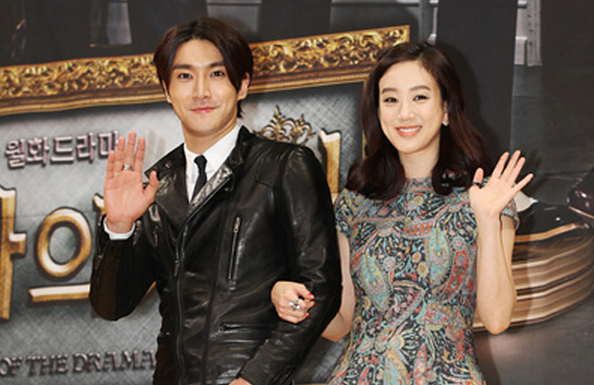 Super Junior’s Choi Si Won and actress Jung Ryeo Won recently snapped a photo together. On November 16, the singer-actor tweeted, “One shot of Lee Go Eun, a writer who still keeps her patience no matter how unjust things are, and Kang Hyun Min, a super nice guy who never gets angry,” and attached a photo of himself with his co-star.

In the photo, both actors expressed the characteristics of their characters in their latest SBS series, “The King of Dramas,” which is quite the opposite of what Choi Si Won described themselves as. In the drama, Jung Ryeo Won plays Lee Go Eun, a scriptwriter who has no patience with injustice and speaks against it. Choi Si Won plays Kang Hyun Min, an A-list actor who cares only for fame and fortune. While he is loved for his intelligent and sophisticated image, he’s actually quite the diva.

Netizens who’ve seen the photo commented, “That’s a funny photo,” “Haha Choi Si Won is really funny in this drama,” “I love this drama,” and more.

“The King of Dramas” takes a look into the world of drama production and also stars Kim Myung Min.

Super Junior
Jung Ryeo Won
KPLG
Choi Si Won
The King of Dramas
How does this article make you feel?