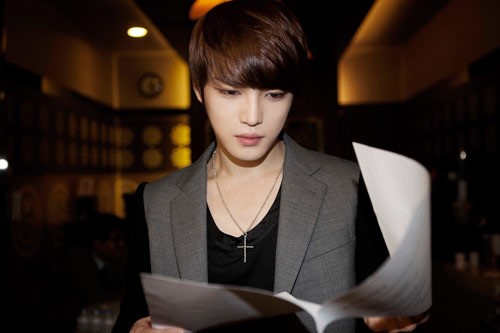 Kim Jaejoong: “I Thought ‘The Jackal is Coming’ Was Written For Me”

Kim Jaejoong of JYJ stars as a top actor “Choi Hyun” in the newly released film “The Jackal Is Coming.” The new movie is about a notorious serial killer who kidnaps a popular celebrity. The movie is directed by Bae Hyung Joon (“Too Beautiful to Lie” and “Boys Don’t Cry”) and stars Kim Jaejoong and Song Ji Hyo.

Kim Jaejoong found that he could relate to his character’s circumstances and personality, especially in lieu of recent events. His acting is in sync with the relatable character who deals with crazy stalkers, a careless manager, and an illicit relationship with the wife of a CEO.

The singer met up for the interview with Joy News after the premier of his movie. Although he looks like he could be cold and blunt, he was quite friendly and had an affectionate personality. He spoke easily and honestly about his expectations of what’s to come and he could not hide his excitement in his expressions and posture.

At the press conference for the movie premiere he looked more nervous than anyone would expect a top idol star would be. Instead of acting like the veteran of the spot light that he is, he appeared more like a rookie actor at his very first press conference.

When asked if it was embarrassing to see his face so large on the screen he answered, “I’m embarrassed wherever I see my face so it was even more so seeing it on the big screen.”

“I’m 50/50 on how I feel when people say I look unique. Sometimes I like it, sometimes I don’t like it. Even though I don’t always hear ‘you are really handsome’, I think my face is unique and has personality. The uniqueness has its advantages and disadvantages. People who don’t like others who stick out don’t like me, but people who view it favorably like me. However, I think positively about my face. It’s also interesting to me that I have female fans because of how I look.”

Kim Jaejoong had received numerous offers to be in other movie project but he had waited for the right role to come. The offers that he received before were mostly melodramas. He was attracted to this project because the movie was not too heavy and relied on the strength of the male character as a comedy.

“I would be lying if I said I wasn’t burdened. However, if the movie had been serious and heavy, I would have been even more burdened. Since ‘Jackal’ is an easy to watch comedy, I was more comfortable with having my face on the movie poster.”

When he first read the script, Jaejoong was astounded. “After I read the script I asked the screen writer, ‘Did you perhaps write this for me?’. He said he didn’t but that’s how similar the script was to my life. I was able to empathize with the character since I’ve been in the entertainment industry. You can just view the movie as a slightly exaggerated portrayal of celebrity life.”

Kim Jaejoong is the type who would rather work tirelessly than take a rest. On what his plans were for after the movie he said, “In the future I want to challenge myself with a cool action film or a high school movie like ‘A Wolf’s Temptation’.”

But before then, what sort of hopes does he have for the people who will watch his film? “I want audiences to think ‘Oh, so Kim Jaejoong has these kind of colorful charms’ when they watch the movie.”