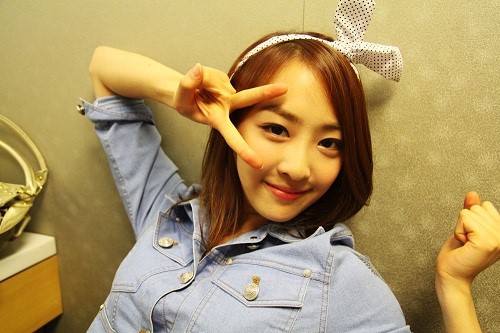 SISTAR’s youngest member Dasom debuted at her age of 18 in 2010. She gained the fame and skill through her singing career and recently is trying out an acting career. Dasom participated in the interview with Star Column with enlightened attitude and honest replies.

Dasom is currently acting inn KBS’s “Shut up and Family.” Before she joined SISTAR, she has never given away the first place at school. She is a perfectionist who knows how to organize her duties and plans. In the outer appearance, Dasom may appear womanly and mature yet she is still a young girl inside. Because she tends to smile all the time, people don’t realize the hardships she had to go through in the past.

Dasom said Yoon Da Yoon, the character of in the drama, has similar traits as the Dasom before her debut. Thus, she didn’t have much difficulty expressing her character. She simply acted like herself during the filming. Dasom exlaimed, “Yoo Da Yoon! Nice to meet you!”

The singer revealed that acting has been her dream since the childhood and that she was happy that her dream came true by joining SISTAR. There is no regret. She says she will try her best and make the drama successful!

Dasom
SISTAR
Star Column
How does this article make you feel?