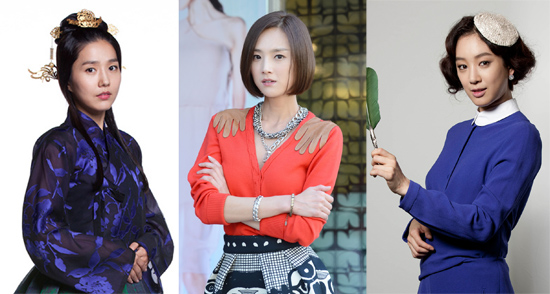 The 90s Kpop beauties known as “idol fairies” have reappeared on the small screen in dramas on the same channel, SBS. Jung Ryeo Won (“Drama King”), Lee Jin (“Daepoongsoo”), and Lee Hee Jin (“My Love Madame Butterfly”) share the similarities of being in an SBS drama but also having the same debut year of 2002.

Jung Ryeo Won originally debuted in the group Chakra in 2000 but debuted on the small screen in 2002 with the drama “Saxophone.” She then established herself as an actress in “Hello Franceska” and “My Name is Kim Sam Soon.”

This year she starred in the romantic movie “Never Ending Story” next to Um Tae Woong. The movie won an award at the Fukuoka International Film Festival. After the movie she went back to dramas with “Drama King.”

Lee Jin has been praised for her acting in “Daepoongsoo.” Although she has only appeared in the first part of the drama she had an underwater kiss scene and performed a realistic birth scene.

In 1998, she debuted in the legendary female idol group Fin.K.L and in 2002 she debuted as an actress in the sitcom “New Nonstop 3.” She appeared in other such works as “Modern Housewives”, “King and I”, and “Glory Jane.”

Lastly, Lee Hee Jin holds her own playing the rival of the top actress in “My Love Madame Butterfly”. The tense relationship between the two has caught the attention of the viewers.

Lee Hee Jin debuted, before Jung Ryeo Won and Lee Jin, in the group Baby Vox in 1997. Like the others she debuted as an actress in 2002 with the sitcom “Zoo People.” She then appeared in the musicals “Funky Funky” and “Singing in the Rain.” After appearing in “It’s Okay Daddy’s Girl” and “Greatest Love” she won the Rookie Drama Actress Award in the 19th Cultural Entertainment Awards.

A representative of SBS said, “The acting talents of these ladies can no longer be doubted because of their eye-catching performances in the dramas. We can expect more bright performances from these actresses in the future.”