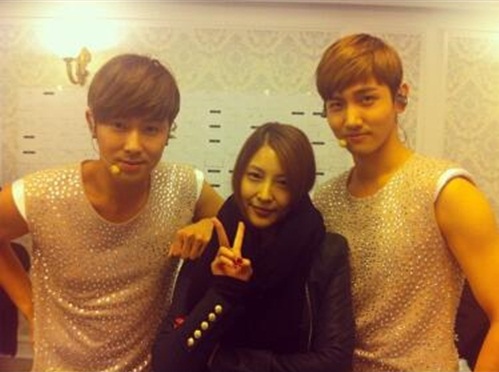 DBSK has kicked off their “TVXQ! Live World Tour ‘Catch Me’” in Seoul Olympic Stadium, and SM Global Twitter recently put up two pictures to celebrate.

The first picture is from their rehearsal. Yunho and Changmin are surrounded by their back dancers in an empty stadium. The second picture is from the ending of the concert as DBSK and their supporting performers raise their hands up before they take a bow.

DBSK has received support from their fellow lablemate. BoA tweeted “DBSK Catch Me live world tour!! They started today. Do the rest as well as you did today. Fighting! You are the best!” and put up a picture that she took with the duo.

This is DBSK’s first world tour in four years. In January of next year, they will go to Hong Kong as a continuation of their tour.

BoA
DBSK
KPLG
SM
tvxq world your catch me
How does this article make you feel?