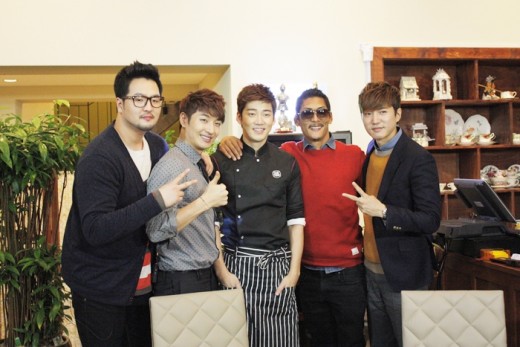 Yoon Kye Sang Reveals The Reason Why He Quit g.o.d.

The last episode of “Yoon Kye Sang’s One Table” aired on November 17. During this episode, Yoon Kye Sang invited all of the g.o.d. members and treated them as his guests.

After they finished their meal, everyone started to reminisce about their g.o.d. days. Then, Yoon Kye Sang explained his reason behind quitting g.o.d. to pursue his acting career.

Yoon Kye Sang started off by saying, “There is something that the members don’t know,” and “I was going to quit the celebrity life.”

He continued, “I received a chance to start acting and I really liked it,” and “Because of a lot of things that happened, I couldn’t deny all those rumors. I just had to accept it.”

“When 40,000 fans turned into antis and I had to stand on stage for the g.o.d. sixth album show case, I really had to muster up all my courage.”

Due to Yoon Kye Sang’s surprising confession, Park Joon Hyung, Danny Ahn, Son Ho Young and Kim Tae Woo could not suppress their tears. Kim Tae Woo said, “I misunderstood everything for eight years,” and “I was so stupid. I was young and I believed in the things I saw ahead of me and was assured that it was right. I never thought differently. I just always resented you.”

After sharing their deep talks, Danny Ahn commented, “I’m grateful to Kye Sang for showing such courage.” Kim Tae Woo said, “I think Kye Sang hyung struggled more than we did. I think we cleared up a lot of things today. I’m so thankful because I think we can be together from now on.”