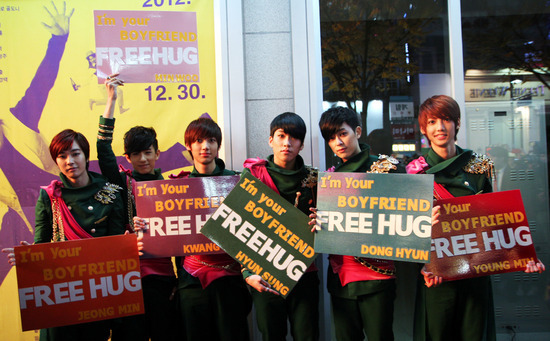 It’s been revealed that Boyfriend had to stop their “Free Hug” event due to security reasons.

On November 18, the members stood on the streets of Myeongdong (a hot tourist spot in Seoul) and attracted more than 1000 fans. Because of the possible dangers arising from the very large crowd, Boyfriend had to move locations. It turns out that they had to stop the event again because more fans than anticipated showed up creating a safety risk for not just the members, but the fans themselves.

A representative from Starship Entertainment commented, “Boyfriend wanted to have the event to thank the fans who are their strength, but more fans showed up than anticipated. It’s sad that the event had to be stopped midway, but it’s for the safety of the fans. Boyfriend will see the fans at a better opportunity in the future.”

Meanwhile, Boyfriend has released their first full-length album and are busy promoting the title track “Janus.”