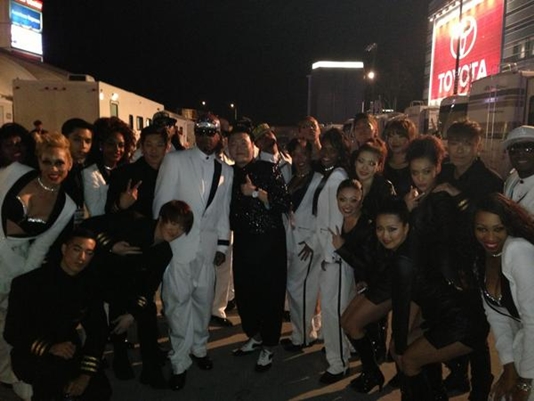 PSY has stood on stage at the American Music Awards (AMA) for the finale with hip-hop artist MC Hammer.

On November 18, the AMAs were held at the Nokia Theater in Los Angeles, California. PSY attended and won the New Media Award as well. This event was televised live by the American channel, ABC.

Right before the awards ceremony, PSY spoke at an interview, “I will be up on stage with a special guest,” which raised the level of curiousity. Many predictions were made on who that special guest is but later on, to many people’s surprise, PSY performed a collaboration stage with none other than MC Hammer.

The two mega-stars performed a mash-up of their two hits, “Gangnam Style” and “2 Legit 2 Quit.” It was a “black and white” concept performance with PSY sporting an all-black outfit whereas MC Hammer sported a white outfit. Both of them showed great chemistry as they gave a fantastic performance that captivated the audience.

Previously, PSY also collaborated with Madonna during her world tour concert, which became a hot topic.

Meanwhile, PSY also attended the MTV VMAs this past September and the MTV EMAs in November, where he won the award for Best Video.