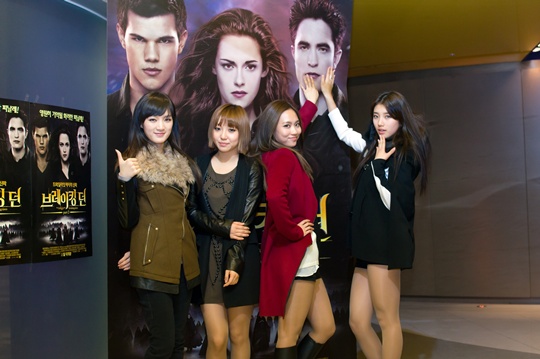 On November 16, girl group miss A watched one of Hollywood’s most anticipated movie, “The Twilight Saga: Breaking Dawn – Part 2,” with their fans. After the screening of the movie, the members took various amusing poses with their fans in front of the film’s poster.

Jia excitedly said, “I have read all the original books of the ‘Twilight’ series. But the movie was better.” Fei shyly expressed that her favorite scene was the fight that happened on the snow field and picked the vampire “Garrett” as the sexiest.

Min commented, “Fun: A, Romance: A, and Action: A too.” The four members mentioned on the Twitter how much they enjoyed the movie and encourage their friends and fans to watch it as well.