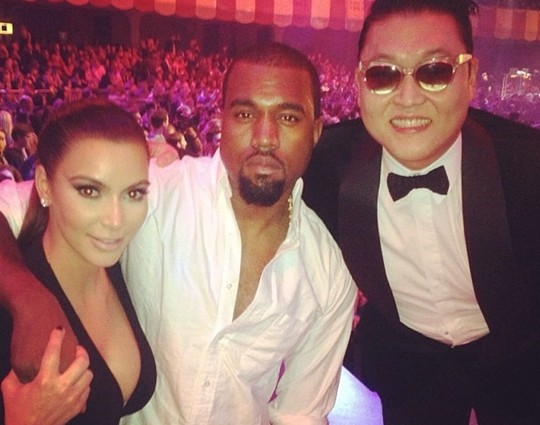 We know some of you are getting tired of the whole PSY “Gangnam Style” craze now, but we wanted to make sure we gave our one last tribute to PSY’s sensational debut in the U.S! Although he hasn’t released his official worldwide album yet, PSY appeared in countless events and awards shows, building crazy networks of celebrity friends in the U.S!

In this article, we put together 20 of the biggest stars PSY met during his U.S. promotion. No K-Pop star has ever made it this big in the U.S., and PSY’s global presence was felt almost every day over the past two months!

From Kanye West to Britney Spears, relive the special moments by clicking the arrow at the top of this box! Good luck PSY and hope to see your worldwide album soon!

On November 19, PSY posted on twitter, “I checked Justin Bieber out and just found out that he’s perfect with my dance move!! lol” along with a picture he took with Justin Bieber. The photo was taken at the American Music Award (AMA) on November 18.

On November 18, PSY uploaded a photo on his Twitter, along with a message, “I was able to have a meaningful conversation with will.i.am. We talked about music, life, and career. Tomorrow I will make sure to bring Soju.”

On November 13, PSY made a surprise guest appearance at Madonna’s concert in New York! They performed a remix of Madonna’s “Give It to Me” and PSY’s “Gangnam Style.”

On November 12, Kim Kardashian tweeted, “Gangnam Style,” with a photo with her boyfriend Kanye West and PSY. The photo was taken at the “2012 MTV European Music Awards” in Frankfurt, Germany.

PSY met model-turned-TV personality Heidi Klum at the “2012 MTV European Music Awards” to film a short clip that was revealed at the awards show! Check out the video here!

On September 15, an iPhone video footage of PSY and Usher party it up at Circle, New York City’s most famous K-town club, surfaced online. Watch the video here!

On September 10, Britney Spears posted a photograph of herself with PSY and fellow X-Factor judge Simon Cowell. The photo was taken at backstage of “The Ellen DeGeneres Show,” where the three co-starred.

On September 9, PSY tweeted, “With the guy called @chrisbrown,” and attached a photo of himself with the American multi-entertainer from the “2012 MTV Video Music Awards.”

On October 28, PSY uploaded a photo along with a message, “Steven Spielberg thanked me today for giving him energy with my music. I will never forget this day.”

In September, PSY had an English interview with Ryan Seacrest on his radio show. Watch the full interview here!

Psy tweeted on October 17, “Had a great time with @RealHughJackman” along with a set of photos. Following that tweet, Hugh Jackman also posted, “Slicing gangnam style! Great to meet @psy_oppa who visited set yesterday.”

On September 19, PSY wrote, “One and Only,” on his Twitter with an affectionate photo with Ellen DeGeneres. Previously, Psy had made a brief appearance on the “Ellen DeGeneres Show” to teach pop star Britney Spears the famous horse riding dance.

On September 27, PSY met Google Inc.’s chairman Eric Schmidt at Google Korea’s office in Seoul. The chairman may not be a celebrity, but he’s perhaps the most influential business personality on this list!

LMFAO‘s official site uploaded pictures of members Redfoo and Skyblu together with PSY. The celebrities were caught having fun in a club on November 8 and took some pictures together.

Casts of “The View” and “Jersey Shore”

On October 27, PSY uploaded two photos under the title, “Ehhh Sexy ladies.” One of the pictures is PSY dancing with Babara Walters and the rest of the casts of ABC’s “The View.” The second picture shows PSY with the casts of MTV’s popular reality program, “Jersey Shore.”

On November 1, PSY tweeted in English, “Isn’t this funny to tweet pic with Jack Dorsey, founder of twitter. It was pleasure man.”

On October 22, PSY tweeted a photo taken with American TV personality and comedian Betty White, with a message, “I met the legendary ‘Betty White.’ How come she knows me!! lol.”

He’s not exactly American, but he’s worth a mention on this list! On November 11, PSY released a phtoo along the message, “England tonight! Please check out the ‘Jonathan Ross Show.’ And you too! (‘UK! Plz watch me at the Jonathan Ross Show tonight! U too @ wossy.’”