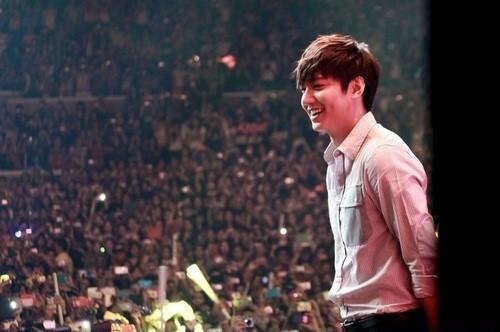 According to his agency’s officials, Lee Min Ho arrived in Manila on November 15, and held a press conference with the local media. The next day he held a large scale event at the Araneta Coliseum. This event was sponsored by the clothing brand Bench, which Lee Min Ho is an exclusive model for. Ten of thousands of fans gathered outside of the venue but not all were able to get in.

After shooting a commercial on November 17, he held a fan signing at a local Bench store the next day. The large number of hopeful and adoring fans caused traffic delays in the area.

A Korean resident of the Philippines said, “Out of all the Korean celebrities to come to the Philippines, Lee Min Ho has received the most interest. We’ve played his famous dramas such as ‘Boys over Flowers’ and ‘City Hunter’, and we plan to continue with airing his latest drama, “Faith’.”

Lee Min Ho has received star treatment and attention from the local media from the minute he set foot in the country. He has dominated the news with headlines such as “Manila Falls in Love with Lee Min Ho” and “Lee Min Ho has Pushed the Typhoon Away with His Arrival.”

An organizer of the event said, “This has been the best day of my life thanks to Lee Min Ho. His modesty and warmth has touched the hearts of the Filipinos.”

After wrapping up his drama “Faith” Lee Min Ho promoted in China and next month he will have a fan meeting in Yokohama, Japan.