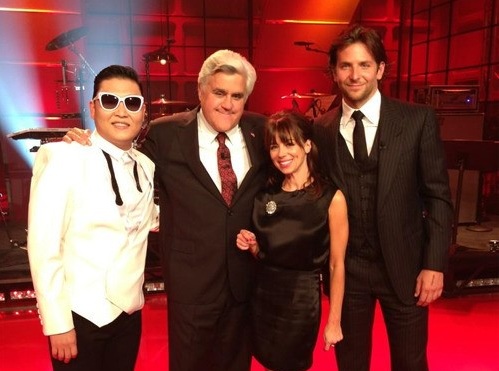 On November 22, PSY wrote on his Twitter, “Make sure you watch me appear on ‘Jay Leno’s Tonight Show.’” Along the message, PSY posted a picture where he’s seen with other guests, Bradley Cooper and Natasha Leggero. PSY’s appearance took place on Thanksgiving Day, reflecting the musician’s explosive popularity in the U.S.

Netizens commented, “PSY is the biggest K-Pop star we’ve seen to date,” “I never expected to PSY to be with Jay Leno,” and “They look like close friends!”

Meanwhile, PSY is expected to wrap up his U.S. promotions and head off to Southeast Asia next week. He will visit Bangkok on November 28 for a local event and fly to Hong Kong the following day to perform at the “2012 MAMA (Mnet Asian Music Awards)” on November 30.