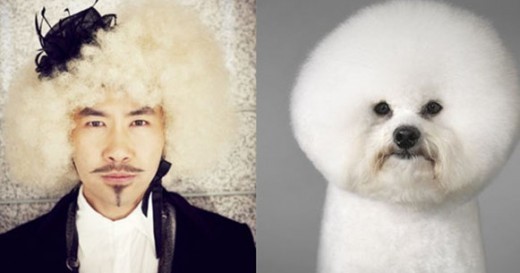 Is it just me, or is anyone else seeing double?

On November 23, Noh Hong Chul (random fact: did you know he studied mechanical engineering in college?) uploaded a picture of himself and his competition. He included a rather hilarious caption, “This dog? And me? Can’t be. Can’t be. We’re different no matter who looks at it. No way, where do we? Absolutely no. No.”

The first picture he shared is of a white poodle with untamed hair, staring intensely at the camera. The second picture is of Noh Hong Chul with what seems like a bleached afro wig and tops it up with a small black hat headband.

It turns out he was dressed in this getup for an episode of MBC’s long running variety show “Infinity Challenge.” This episode just appeared on air on November 17 and his appearance brought a lot of laughter to the set.

Netizens who saw the pictures commented, “You both look the same no matter who looks at it?” “Ah, Noh Hong Chul’s serious face is actually hilarious, “He really looks like a foreigner,” “That’s a desirable hairstyle,” “It’s funny just looking at the pictures.”

Infinity Challenge
Noh Hong Chul
KPLG
How does this article make you feel?