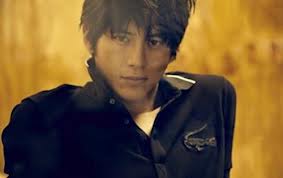 In the picture, actor Go Soo is holding hands with fellow show member Kim Jong Gook and is showing a rather hurried and serious facial expression. Even through the chaotic shooting, Go Soo’s handsome features were unmissed.

Netizens who saw the picture commented, “I’m just shocked that Go Soo is that handsome,” “Haha too bad for Kim Joong Gook to have stood right beside Go Soo,” and “It’s sad that he’s a married man.”

It was indeed reported that the actor and actress Han Hyo Joo were in Jeongeub, in the South Jeolla Province on the November 26 for the shooting of the SBS show “Running Man.” The two are stars of the upcoming movie “Bandage” that is set to be released next month.