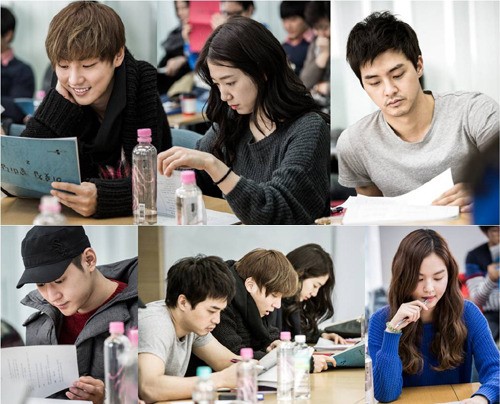 New tvN drama “Flower Boy Next Door” cranks up on preparations for its forthcoming January premiere with a script-reading session. According to reports in local news agencies, the cast members and production staff of the drama gathered on November 21 at the CJ E&M Center in Sangamdong, Seoul for the first script reading.

Leads Yoon Si Yoon and Park Shin Hye were in attendance, along with fellow cast members Kim Ji Hoon, Go Kyung Pyo and Kim Yoon Hye. In the romantic comedy drama, Park Shin Hye plays Go Dok Mi, a Rapunzel-like character who is locked in a tower away from the world, but ends up spying on her next-door neighbor, Enrique Geum, Yoon Si Yoon’s character.

Reports said the first script reading went smoothly and was a chance for the actors to showcase how immersed they are in their characters. The cast members and production staff were also able to rebuild rapport, having had the opportunity to work with each other in various projects in the past.

“Flower Boy Next Door” is under the helm of PD Cho Mun Joo, who remarked, “The first script reading session went very well. Our many exchanges with the actors in advance has resulted in more research for their characters. I am confident the actors are all of ability and fit well with each other. I expect good work.”