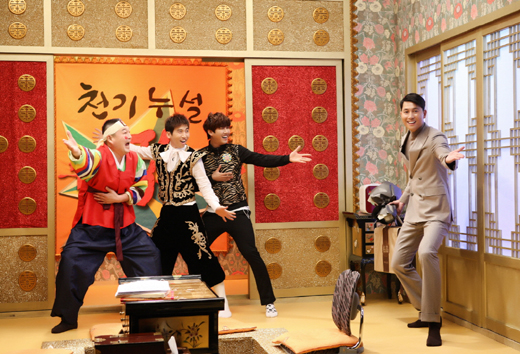 Jung Woo Sung revealed for the first time that he in fact knew about Lee Ji Ah’s marriage to Seo Taiji before it was made public last year.

During the recording of the latest MBC “Knee Drop Guru,” which is Kang Ho Dong’s comeback episode, Jung Woo Sung shockingly said, “Honestly, I knew about her marriage to Seo Taeiji. She told me about everything during our trip to France.”

Jung Woo Sung’s unexpected confession shocked everyone at the set, as no one expected him to get into such details. Jung Woo Sung went on a trip to France early last year with Lee Ji Ah. Photos of their trip were leaked online, which made their secret relationship public. But a couple months later, Lee Ji Ah was found to have married Seo Tai Ji and was in the process of a divorce. Back then, Jung Woo Sung was viewed as the victim of the whole story, and it was reported that he was going through tough times to overcome the shock. It turns out those reports were false as Jung Woo Sung knew about the marriage and divorce all along.

“Jung Woo Sung appeared on ‘Knee Drop Guru’ not as an actor but as an honest man. Departing from his public figure image, Jung Woo Sung used his guest appearance as a chance to give a confession about his private life,” an official was quoted as saying.