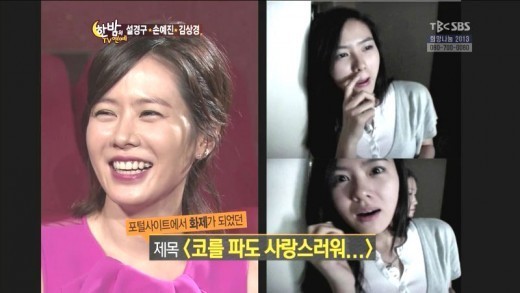 During the show, the interviewer brought up the famous picture of Son Ye Jin that was uploaded on a portal site under the title “Son Ye Jin caught picking her nose, but she is still lovely.”

Son Ye Jin laughed at the picture and explained, “I was just pretending and joking around. If you look closely, my finger is actually near my nose and not in it.”

During the interview, when Seol Kyung Gu was asked what he thought of Son Ye Jin, he answered, “To me, Son Ye Jin feels like a little brother.”

Seol Kyung Gu then added, “I didn’t realize how talkative Kim Sang Kyung can be. During filming, there was a lot of harmful gas around us so it was hard for most of us to talk. But even then, Kim Sang Kyung talked continuously.”

Meanwhile, film “Tower” tells a story of people who survive being stuck on the 108th floor. The movie will be released on December 19.