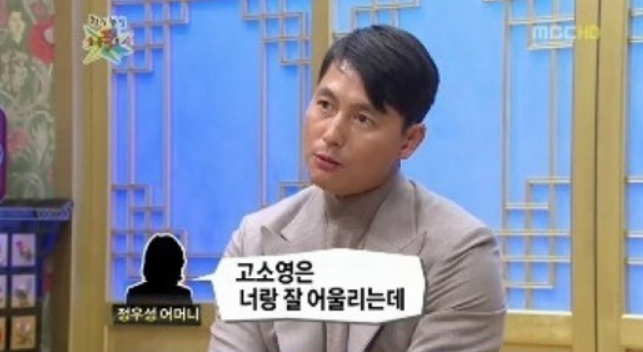 On MBC’s “Knee Drop Guru” that aired its first return episode on November 29, actor Jung Woo Sung appeared as the first guest and discussed his connection with now married actress Go So Young.

Jung Woo Sung stated, “I knew Go So Young even before she became an actress. I first met her when we were working at a café. She was so beautiful. I thought that this must be what a real woman looks like.”

He continued, “One day my mother asked me why Go So Young married Jang Don Gun. She said Go So Young and I would have made a better couple. Other people around me have also said the similar things.”

At the end of the show, Jung Woo Sung added a message for Go So Young. He said, “So Young, if you get lonely, you can call me.”

Meanwhile on this show, Jung Woo Sung also discussed his personal problem, which was the fact that he thought he looked better in person than on TV.