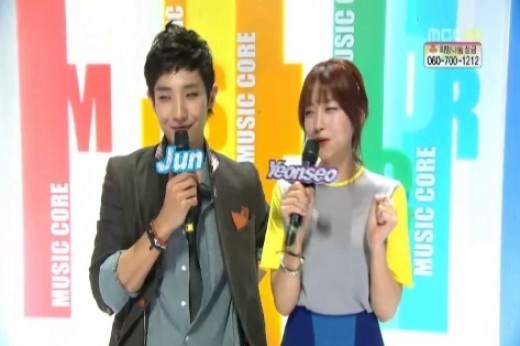 Oh Yeon Seo Emcees “Show! Music Core” With Hubby Lee Joon Because She Was Jealous Of…?

Oh Yeon Seo has recently stood as a special MC for the MBC “Show! Music Core,” and displayed her affections toward her faux-husband, Lee Joon of MBLAQ.

On the episode of “Show! Music Core” that aired on December 1, Oh Yeon Seo and Lee Joon both stood as MCs. Lee Joon asked Oh Yeon Seo, “How did you get to come to ‘Music Core?'” Then Oh Yeon Seo answered, “Last week, I saw you having fun as you emceed with Han Sun Hwa so I got really jealous. That’s why I came.”

Lee Joon and Oh Yeon Seo are currently one of the fake married couples in the fourth season of “We Got Married.” They are receiving much love for being the “obsessive couple,” which was why viewers paid much attention to the MC couple during this episode.