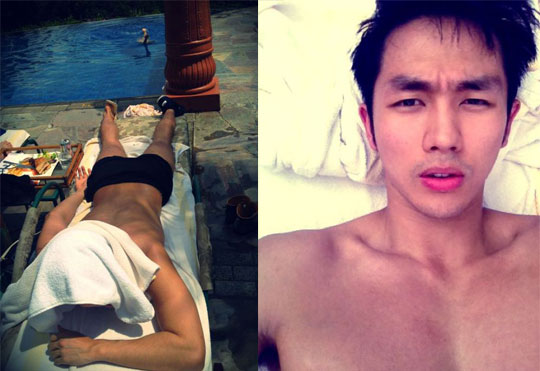 On his Twitter in the afternoon of December 2, Seulong uploaded two photos along with a message, “I am sitting beside a hotel swimming pool in Kuala Lumpur. I can’t believe I am not allowed to go into the pool. With my injured leg, I am tanning. The sun is so much hotter here than in Korea.”

In the pictures is Seulong enjoying his time off at a swimming pool. He recently injured his leg and therefore appears to be avoiding water. He, however, is enjoying the tanning under the hot sun. What the fans appreciate the most is the fact that Seulong has revealed his lean well-muscled body.

Fans who saw these pictures replied, “I was eating ramen when I saw this picture. As soon as I saw it, I stopped eating,” “Who took the picture for him?” “Seulong would look so much sexier in dark tanned skin.”

Meanwhile, Seulong has successfully transformed into an actor via film “26 Years.”

2AM
Seulong
KPLG
How does this article make you feel?