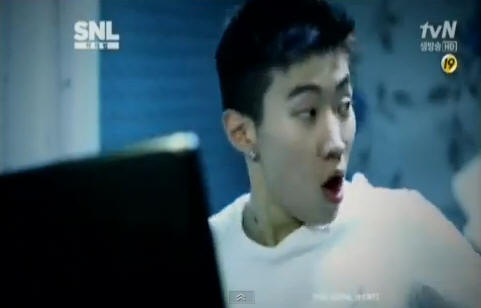 Jay Park Gets Caught “Pleasuring Himself” on “SNL Korea”

Jay Park had hosted this week’s “SNL Korea” and hilariously showed off his rated-R acting.

On the episode of “SNL Korea” that aired on December 1, the host Jay Park and SNL member Kim Seul Ki acted together as a couple in a sketch called “Because I’m A Guy.”

The sketch started off with Jay Park checking to see if Kim Seul Ki was asleep. Afterwards, he quietly sat down in front of a computer and slid down his boxers as he plucked out a few tissues. Jay Park faced the computer with a mischievous grin and started making some “movements” when all of a sudden, the door flung open and the lights turned on as Kim Seul Ki barged in, catching him in the act.

With a bewildered face, Jay Park started rapping a parody to Eminem‘s “Love The Way You Lie.” He rapped, “Don’t misunderstand, this is the first time I did this. I never did this before. I was just checking to see if ‘he’ was doing okay,” as he peered inside his boxers.

Jay Park continued, “It’s similar to working out with dumbells,” “Why didn’t you knock? It’s not because I’m not satisfied with you. Guys just need to do this regularly,” “You said you were tired last week? Well, the ‘magic’ kept coming last week so I had no choice but to open my hidden folder,” and more.

Jay Park
KPLG
SNL Korea
How does this article make you feel?