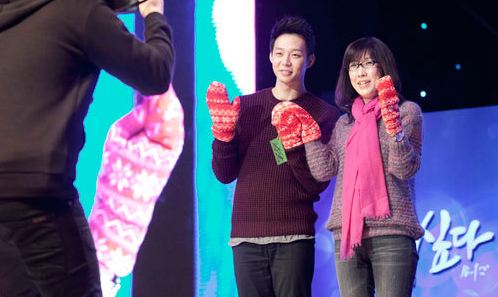 On December 2, Yoo Chun introduced his character Han Jung Woo from his current drama “I Miss You,” which received much praise from the fans.

He held several games with his fans including wearing couple clothing, making it easier for his fans to imagine that they’re dating their favorite celebrity.

An official who helped with the fan meeting commented, “Park Yoo Chun has such a strong fan following who watches his dramas. We showed them a clip, but they reacted like they already knew what happened. And the fans already collected donations before the fan meeting happened and even gave the staff drinks as presents.” It was revealed that they estimated 1,200 people will attend the fan meeting, but 3,000 people showed up proving his stable popularity.

Park Yoo Chun shared his feelings, “I’m very thankful for the fans who came here even though it’s very cold. It was a very meaningful time spent with fans at a special event. I’m really surprised that the fans are up to date even with the latest drama. I will do my best to work hard during the remaining part of the filming. Please cheer for us and watch our work with much interest.”

JYJ
Park Yoo Chun
KPLG
I Miss You
How does this article make you feel?